The following taken from :
( http://www.differencebetween.net/language/difference-between-japanese-and-american-culture/ )

There are a number of connotations that are often used to describe a people’s culture. But culture is generally accepted as the way a community of people has chosen to live their lives in the best ways they feel would harmonize their traditions, languages, notions, dress or dietary ways.
As such, any comparison of two cultures would yield a range of stark cultural differences. And definitely, a comparison of American and Japanese cultures reveals numerous variations. Japanese, as well as American culture is heavily influenced by the kind of society of people living in either country. For instance, the society in Japan is largely homogeneous and middle class, whereas the American society is heavily heterogeneous, owing to the increased levels of immigration. This has contributed to a very diverse ethnic setting and widened the inequality gap in American society. These two varying trends have profound influence on the cultures of the two societies. 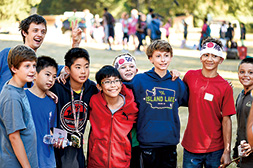 Because of the divergent set of ethnic groups in American society, this phenomenon has helped to breed a number of subcultures existing within a single American macro-culture. This is one of the key distinguishing features of American culture. Consequently, every American citizen belongs to a number of subcultures, which may be connoted as ethnic origin, religion, class, gender, exceptionality, geographical location and so forth. Every individual subculture has certain common attributes with the main macro-culture. On the other hand, the Japanese society is not as diverse, in terms of subcultures. This is partly due to the fact that there is less immigration to Japan, and only a small fraction of the total population (<1%) are not Japanese by ethnicity. The Japanese society is largely urban, hence a big population density.
The structure of the family in the two cultures widely differs too. While in Japanese culture the structure of the family is very much still defined by tradition, in American culture the family structure is much more “free” and family members freely choose roles depending on likes or tastes. Roles are not traditionally defined.
Still with family life, the roles of the wife and husband in a family differ in the two cultures. While the wife in any Japanese family is expected to look after her husband, American culture will almost take that notion as offensive. In Japanese culture, the man is seen as the family head and all his needs must be tendered to first, while in American culture, a husband and wife are equal and their roles in the family are not clearly defined, but rather are a matter of and can do.

How then do these cultural differences show themselves in an American home? Here's what you might see...
"Americans are often casual and easy going in their contacts while Japanese are usually more tense and formal. A Japanese youngster will probably see and experience many things in your home and lifestyle that you will not be aware of. Some of these things, of which you are altogether unconscious, they may well remember for the rest of their life. Their contact with you will leave a deep impression which will extend to their family and friends as they will report every detail on their return.

Will this experience bring the two families together for a lifetime?
Because the Japanese are often fearful of making "mistakes" and thus bringing ridicule upon themselves, you will more often than not hear from the student's parents due to their lack of English language ability. However, please know that the impression you leave on the student will indeed be profound. Truly, opening your home to this child will be far more of a "bridge building" experience than any number of international conferences, sermons, or good-will get-togethers. This is the main reason for "homestay".